Understand Your HVAC—Superheat and Subcooling

If you’re an engineer maintaining HVAC units, you need to understand some fundamental concepts. Two important terms to grasp are superheat and subcooling. These are critical to the refrigeration cycle, but can be tough concepts to visualize.

Boiling is when a liquid gains heat and transforms into a vapor. Superheat occurs when you heat vapor above its boiling point.

Let’s say that a refrigerant boils at 40 degrees Fahrenheit at a low pressure in the evaporator. Then you continuously heat the vaporized refrigerant, elevating its temperature to become a 50-degree vapor. This temperature increase above the boiling point is superheat. The formula to calculate superheat uses the current temperature and boiling point.

In this example, the superheat is 10-degrees.

Superheat is critical in HVAC because it ensures the liquid refrigerant is boiled off before it leaves the evaporator and heads to the compressor. Even small amounts of liquid can cause detrimental damage to a compressor in an HVAC system.

Diagram of Superheat and Subcooling 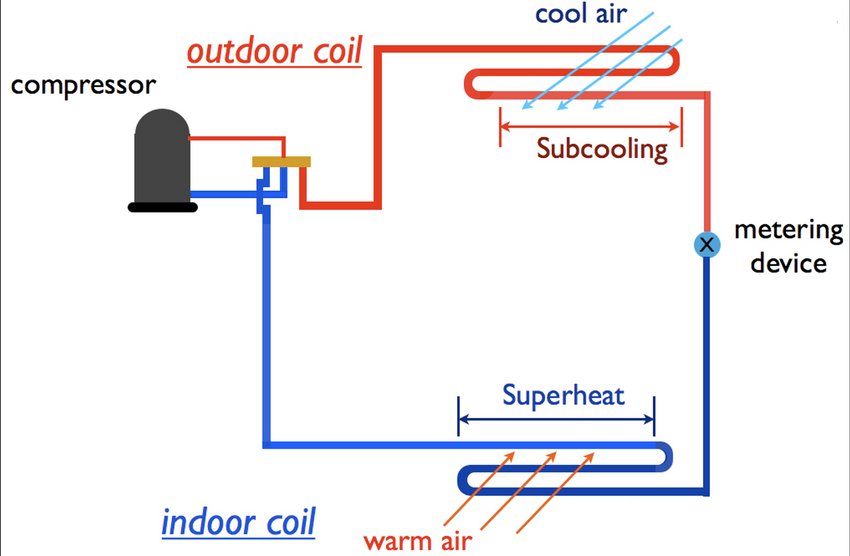 Let’s use the same refrigerant with a high pressure boiling point of 120 degrees for the following example:

The refrigerant is a 140 degree vapor heading into the condenser. Once the condenser cools the refrigerant to 120 degrees, it will begin to turn back into a liquid. But the cooling does not stop there! Subcooling is also calculated using the boiling point (sometimes referred to as the condensing point) and current temperature.

So, if the condenser brings the refrigerant temperature down to 105 degrees, it has been subcooled by 15 degrees. In the refrigeration cycle, subcooling is an important process that ensures liquid refrigerant enters the expansion device.

Get on Top of Your HVAC Maintenance

HVAC has always been important to a building’s functioning. But in a world living through a global pandemic of a lethal airborne disease, HVAC maintenance is vital. To ensure your building keeps its ventilation in tip top shape, download Building Engines’ Ultimate HVAC Management Kit for Commercial Teams. It’s an all-in-one kit to help you maximize your HVAC performance and longevity.